This particular fiction novel was one of the very first I have written, and it is the only one I have penned with a focus on alien invasion. I think that the computer hacker premise of the book is good, and the story is fairly spooky overall.
The prologue consists of nothing but random characters in scattered cities. It relates the very first ufo sightings of the invasion of the Oppressors from varying points of view. As far as an introduction goes, it is superficial, but it is effective because of this fact. Once the invasion of alien life becomes confirmed reality, I introduce the main characters of the book and tell the story.
This is an alien invasion story that really doesn’t have the obligatory ‘happy ending’; nothing about this situation could possibly end happily for humans, and I wasn’t going to pretend it could. But to me, the invasion itself is not the scariest part of ‘Overtaken’; being tested to determine if you are of enough value to live or die is even more frightening. The pressure of the situation, and the truth that even if you pass the tests, you will go to a foreign planet forever, is a grim thought of abduction to have on one’s shoulders. In the real world, people would commit suicide if faced with the prospect. The main reason why I consider this to be one of my best science fiction novels.

There always has to be a hero or two, even if they ultimately are only saving themselves. The character of Josh Nichols takes readers to Washington, DC, with front row seats. Josh works as a code writer at the Pentagon. He is a young, ambitious man with all of his supposed ducks in a row. Something of a workaholic, Josh has no family or girlfriend in DC; he was born and raised in Iowa, so he’s still fairly green behind the ears.
Kamryn Reynolds is Josh’s polar opposite. With a history of security hacker crimes and street-life, she is a seasoned, semi-tough computer hacker who is always dodging the law. When the invasion takes place, these two meet accidentally, and now the hacking stories begin.

In an effort to pick up the pace in this supernatural thriller, I gave humankind a deadline, so to speak. Josh and Kamryn must get this all figured out before they are herded away for themselves.

What is the testing for? This was the fun part for me, because the concept does spark fear in my heart. So, am I being tested for strengths, or weaknesses? What will be done to me, extermination-wise, if I fail either way? Worse yet, what will happen to me if I ‘pass’? It all consists of question marks which dance gleefully around the unknown, and the unknown is the scariest thing in the world. The second reason why I consider this to be one of my best science fiction novels.

Now, we should probably consider the question: Why choose Josh and Kamryn to try and save the day? Well, dear reader, I think the answer is obvious: It makes for a story that is much more fun and relatable, and because, well… It's time for a computer hacker hero. But seriously, isn’t it hard to relate to every super-hero character there is? Real life consists of real people, and that’s what these two kids represent. Yet another reason why I consider this to be one of my best science fiction novels.

‘Superior’ is another character I enjoyed playing with. He is the soulless, alien leader of the Oppressors, and his mission is destruction to his gain. He couldn’t care less about these ‘humans’. To him, they are like cockroaches in a deserted house; they must be exterminated before the new tenants can move in. From that perspective, it is his nature to be who he is and do what he is doing to humanity, just as it is our nature to love puppies and kitties and show compassion. The Oppressors are not able to think or feel in the same way.
The president, and all of his high-end, star-spangled advisors, are at a loss. The reason for this is simple: If aliens ufos came, and they had the technology to get here, chances are they have it over on us. It would be a losing battle if indeed we had to fight one. None of the governments computer geniuses from SETI or NASA think like Kamryn or Josh, which forces the president’s hand. I almost wrote these high-ranking officials as ‘bumbling’, because that’s how I saw them in my mind’s eye. They have been so busy thinking they were omnipotent that they never stopped to think about their own mortality. Bumbling, like I said.

I liked the way all of the ‘hows’ and ‘whys’ worked out the way they did. I hope readers have a good time with this grim story, and enjoy one of my best science fiction novels Overtaken. I hope that fans get out of  the book all I put into it: From the fiction to the fear.

This young man is not really considered a computer hacker he is more of a code writer at the Pentagon in Washington, DC, but he hails from the small town in Iowa. Josh’s parents are alive, but they stayed in the heartland. Josh is literally winging it in life on his own, but he is smart, confident, and driven, so he is unafraid. Josh has no girlfriend, and he is typically too focused on work to hang out with others and have fun. He is dependable, and he is making his parents very proud of him. Though a nerd by nature, Josh is in good shape, and he is very attractive, with longish dark brown hair that he wears a bit feathered; his eyes are brown as well.

Kamryn is a petite girl with blonde hair and green eyes. She is highly intelligent but has absolutely no upbringing as far as moral responsibility is concerned. She is a professional computer hacker and is mostly concerned with staying under the cops’ radar and maintaining her freedom. When the invasion happens, Kamryn takes off, and this is when she meets Josh Nichols. She is quick and attentive to detail, making her the primary candidate for helping bring down the Oppressors. Kamryn falls for Josh just as easily as he does for her, and they must consummate their love in some strange places. These chain of events ad some romantic suspense to the novel. Fortunately, Kamryn’s inhibitions don’t really exist.

President Mason is a man in his mid-forties who is responsible for the greatest country on Earth, but he is in no way ready to deal with the Oppressors when they arrive. He is handsome, with sandy-brown hair and dark light blue eyes. He is always surrounded by advisors and the like, but he is scared to death with the situation at hand, and it shows in the sketchiness he demonstrates. Mason is the kind of man who is quick to turn to those around him for answers while maintaining a façade of full control. He is the first character used to demonstrate the desperate state of man; Mason knows the end is near, and he begins to think about his family, and his love for them. Even in his weakness, Mason possesses a level of wisdom, and he gravitates toward Josh just a bit, sort of in a mentoring fashion.

Superior is the leader of the Oppressors and leading occupant of the mothership, which is under his command. He has a couple of underlings: Secondary, who is his ‘right-hand alien’, and Subordinate, who is basically a lackey for secondary. Even these ever-present companions to the old general are scared to death of him, and it shows. He is the sort of individual who will kill you just as soon as look at you, and he is also the sort to lie to his own people to fulfill his own desires and cravings. It is directly by his extraterrestrial life that the Oppressors spend centuries at war, and this comes out as the story progresses. He would like people to believe he is full of mercy and compassion, but he has ulterior motives for every seemingly merciful move he makes. Tall, with large hands and common receding hairline, Superior and all of his people look very much like human beings, with most of the major differences being in size and proportion. The name ‘Superior’, as well as the names of other Oppressors, are simply the closest thing to human pronunciation they can come up with; the alien language is unpronounceable with human lips.

She is the secretary in the Pentagon and makes several small appearances in the pages of this book. She is a sharp-dressing blonde bombshell who is constantly fetching coffee or other needed items. With a penchant for bright red lipstick, she seems to catch every male eye, but Sharon keeps to herself and does her job well.

These three characters are rooting in the prologue, and the arrival of three Oppressor spaceships is told from their perspectives of the ufo sightings. Huck is a filling station employee whose mean-spirited head is mostly full of rocks. June Ellison is an insurance company employee in Mesa who pretty much cracks up at the sight of an extraterrestrial ship. Jake Hartwell is a doctor in Baltimore who is on his way to his son’s school to deal with the fact that the kid has stolen his gun when he first spies the flying saucer. Each of them could be anyone, and each of them is simply going about their day-to-day lives when the Oppressors arrive. 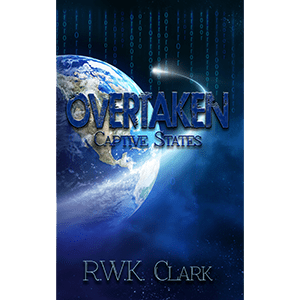