One Of My Best Horror Books Of All Time Box Office Butcher.

Box Office Butcher is a murder mystery psychological thriller novel about a serial killer (a copycat killer).
Dubbed the ‘Box Office Butcher’ by the press, the killer is committing a couple of killings every weekend. This results in Detective Kevin Harmes, of the Los Angeles Police Department, scrambling from here to there and back again to try and keep up. Fortunately, this seasoned cop has some pretty spot-on suspicions of his own. Regardless of this fact, ‘The Butcher’ manages to keep him on his toes, and miserably so, with the sick game he is playing. I consider this to be one of my best horror books of all time. ‘Box Office Butcher’ is my second suspense thriller release, and it is the second book I have written that I would classify as psychological thrillers, or psychological horror. My first novel was ‘Brother’s Keeper’ and my third novel in my list of psychological thrillers would be ‘Passing Through’ another must read. If you like the horrors be sure to try all three serial killers.

Here’s the deal it is important to understand that the serial killer has a vendetta.

For this psychopath, these murders are rooted in a history of abuse and rage, and he feels the compelling need to take care of the issue, which he has carried around with him his entire life. It is more than simply killing because he’s a sicko, or because it’s fun, though these are true as well. His actions are essentially a way to make right a past that has, unbeknownst to him, destroyed him from the inside out.
Keep in mind that none of the ‘copycat’ killings are identical to the one from the film which they are meant to emulate. The Butcher doesn’t have the kind of power it would take to make his victims cooperate with a scripted film and still enjoy the spontaneity and horror he is set on sparking and enjoying. With this being said, he is a careful planner, spending both time and money to get the real-life murders as close to the ones on film as he possibly can, and he comes terrifyingly close each time. Another reason why I add this book to my best horror books of all time list.

Now, let’s talk about the psychopath.

The Butcher is a very sick man, and it was important to drive this home through a variety of methods. I also added extra elements, as an added bonus pointing to his psychosis. A trait I like to add to my psychological thrillers, I believe it helps build up the readers hatred towards the psychopath.
The hardest part of this psychothriller novel, for me, was keeping the real serial killers identity from being given away during the investigation. It was difficult to give some hints here and there while still shining the spotlight on another, as a distraction. There was a fine line here that couldn’t be crossed, at least, not immediately, and it was like a balancing act to walk that line. Another difficulty was keeping each murder original and unique to itself. I didn’t want the repetition found in most suspense thriller mysterious stories, such as the killer simply chasing and slashing each victim in the same manner.

Why is Kevin Harmes so obsessed? As an experienced detective, the fact that a criminal like The Butcher knows that Harmes will buy his bluff and veer off in another direction is bothersome, to say the least. He almost takes this as an assault on his policing ability. Sure, people are dying, but for Harmes, that’s just the tip of the iceberg. The psychopath is also basically making fun of the cops, running them around from city to city in confusion, like small children trying to catch a balloon filled with helium, but is always out of reach.
As can be expected, as the crime thriller goes on, Harmes finds little tidbits here and there which begin to clear the fog covering The Butcher’s identity. Everything begins to make sense about the serial killer. Box Office Butcher is packed full of mystery to make it the best horror books of all time.

Box Office Butcher, with all difficulties aside, was a fun novel to write. The psychological thriller genre which it falls under afforded me much freedom; I just had to sort my way through the murder mystery aspect, what was believable and what would appear to be smoke and mirrors to the reader. I had to reconcile the two to each other without giving away The Butcher’s identity too quickly, and hopefully, I accomplished this properly. I also had a lot of fun with The Butcher’s past; though it was horrid, and the abuse the guy went through are enough to cause anyone to almost understand how someone could go to the kinds of extremes that this serial killer did. I hope you enjoy one of my best fiction books.

Detective Ken Harmes is a seasoned veteran of the Los Angeles Police Department. In his years on the force, he has developed a reputation as a man who will throw himself into his work full tilt, as well as being among the best at criminal profiling- capable of delving deep into a subject's psyche with a combination of research, insight, and good old fashioned gumshoe leg work. Kevin Harmes is the cop who happens to have the pleasure of the ‘Box Office Butcher‘ case landing directly in his lap. The single man has nothing to do but work, and he has no problem dedicating the time and energy needed to chase serial killers. He is relentless in his pursuit, and he is willing to take some pretty dangerous risks to stop the guy. As his investigation progresses, Harmes begins to put together who the suspect probably is, and as he digs into the man’s past, he begins to clearly see how his upbringing brought him to the murderous point he is at today. Kevin Harmes is the kind of man who is constantly thinking, and he takes it personally when a psychopath such as this toys with him. These particular strategic moves are likely the very things that get the man identified in the end, because all they do is spurn Harmes on in determination. An excellent detective for one of my best horror books of all time.

Another LAPD detective, Carter is Harmes’ partner. He is not as verbal or as intelligent as Harmes, keeping his own neck at a fairly safe distance from the chopping block by limiting his own dedication to catching the Butcher. He is willing, however, to accompany Harmes from city to city during the scattered pursuit, and every now and then, he comes up with a valuable point, out of the blue, that is pertinent to the case. Otherwise, Carter is mostly a character that exists to give Harmes someone to think out loud to, bouncing ideas off him as they go.

Donovan Cannon is the serial killer, though he changed his name when he was much younger; because of this, we have no idea which of the suspects he may be. A product of rape, Cannon was abused his entire life and put through a psychologically painful living hell. This is something the psychopath has been planning for a long time. He is deeply damaged, even to the point of being aroused by violence, but to him this is natural, and he doesn’t even think about it. It all seems innocent enough in his mind, especially when compared to what has been done to him in his life. The best psycho for one of my best horror books of all time.

The director of the movie ‘Smash Hit’ is a snob who is at the top of the ranks at Milestone Pictures. He is not only a producer and director, he runs the studio that is his namesake. March never seems to be impressed with what the killer is doing, but he is greatly impressed by the fact that the murders are sending his picture through the roof, making it his highest-grossing movie ever. Because of this, he is less than willing to eagerly assist police. Regardless of his apparent help, March really couldn’t care less, and as far as he is concerned, The Butcher will only make him more money if he completes his murder list.

The leading fiction character and sole survivor in the movie ‘Smash Hit’. Cory is angelically good-looking, though he has a bit of a drug problem and is currently at the top of the American Schoolgirl Crush list.

One of the surviving victims of the Butcher; the fact that Reed survives puts him at the top of the suspect list, along with having not a mark on him and being soaked in his murdered girlfriend’s blood.

Ruth Cannon is Donovan’s mother. She hates the child, seeing only the rape when she looks at him, spawning abuse that is stomach-turning. Ruth was also an up and coming actress when the rape took place, so not only was her life ruined by the incident, but her career is demolished as well. She is a bitter, angry, hateful woman who can’t stand the sight of her own son.

This old man fiction character is the object of the Butcher’s revenge and rage. But now he is an old man living in LA, and The Butcher is well aware of who he is and where he lives. The murder of Myron Dennis will be his ‘coup de grace’, at least in the confines of his own mind.

Box Office Butcher the best horror books of all time.

Put this detective fiction on your best horror books of all time list. 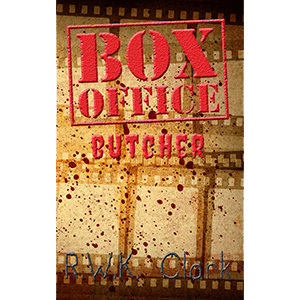